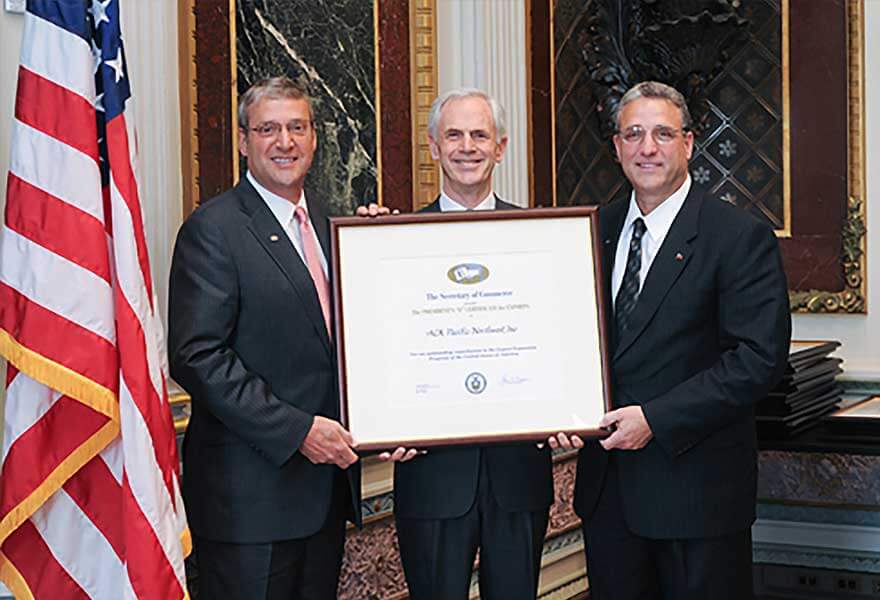 John and Michael Gombos of ACX Pacific Northwest, Inc. today were awarded the Presidential "E" Award for Exports by U.S. Department of Commerce Secretary John Bryson at the White House. The “E” Award is the highest recognition any U.S. entity may receive for making significant contribution to the expansion of U.S. exports.

ACX hay processing facilities are located in Ellensburg, WA, Wilmington, CA, and Stockton, CA which serve all the major U.S. West Coast ports including Seattle, Tacoma, Los Angeles, Long Beach, and Oakland. ACX plans to expand their operations further in the coming months and years in order to serve the increasing demand for their products and export services.

"I am pleased to recognize ACX Pacific Northwest for receiving the President's "E" Award which honors companies that make significant contributions toward increasing U.S exports,” said U.S. Commerce Secretary John Bryson. “This administration is committed to leveling the playing field for American businesses and workers to help U.S. companies build things here and sell them around the world.” “E” Awards winners like ACX have excelled in this effort, demonstrating four years of successive export growth. It is companies like this that are helping to grow our economy and put more Americans back to work."

"Exporting U.S. forage and roughage products is the foundation of our sales growth and we are honored to receive the "E" Award," said John Gombos, ACX’s President and CEO. “When we first began exporting hay in 1978, the world didn't look to the U.S. for animal feed the way it does today. We are proud to do our part to not only support our U.S. farmers, but to help feed nations."

ACX’s Chief Marketing Officer, Michael N. Gombos stated, "We were excited when we heard ACX was selected to receive the prestigious Presidential "E" Award for Exports. After having received the award in a moving and patriotic ceremony, the excitement quickly turned to feelings of humility and thankfulness. We are thankful to God for the tremendous opportunities we have here in the United States."

Mike Gombos went on to say, "Credit must be given to those groups whose efforts and assistance played such a big part of this accomplishment. Our partner, Al Dahra Agriculture, our employees, suppliers, customers, governmental and industry agencies and groups were all part of us winning this award. The USDA, APHIS, FAS, National Hay Association and the U.S. Forage Export Council all play an important role for all of us in the past and future growth in the exportation of roughage and forage to our existing and new customers globally."

Following the White House ceremony, ACX met with national representatives Senator Maria Cantwell of Washington State, Congresswoman Janice Hahn and Congressman and Majority Whip Kevin McCarthy, both of California. These representatives (and many others) have gone out of their way to support ACX’s initiatives to increase hay exports and add jobs.

As a business client of the Department’s U.S. Commercial Service, ACX has benefitted from export counseling, trade shows, market research, and business matchmaking to greatly expand its export sales.

While the UAE and China represent a significant portion of the company’s recent foreign market sales increases, ACX does business in several other regions of the world as well. ACX has demonstrated a substantial increase in the volume of export over a four-year period, a major criterion for the award.

U.S. companies are nominated for the "E" Awards through the U.S. Commercial Service office networks in 108 U.S. cities and more than 75 countries which helps U.S. companies’ export. The primary criterion for the “E” Award is four years of successive export growth or of supporting the export growth of others. “E” Awards are awarded to applicants that can demonstrate a significant contribution to U.S. export expansion that is measurable, innovative, sustainable, and has broad impact.

All nominations are reviewed by the "E" Award committee which is chaired by the Department of Commerce. This includes representatives of Exim bank, the Small Business Administration and the Departments of Agriculture, Labor, State, and Transportation.

This year marks the 50th anniversary of the first presentation of the President’s "E" Award by President John F. Kennedy. The President’s "E" Award was created by Executive Order in 1961 to encourage U.S. companies to sell their products abroad. A second award, the President's "E Star" Award, was authorized by the Secretary of Commerce in 1969 to recognize "E" Award recipients for their continuing significant contributions to U.S. export expansion.