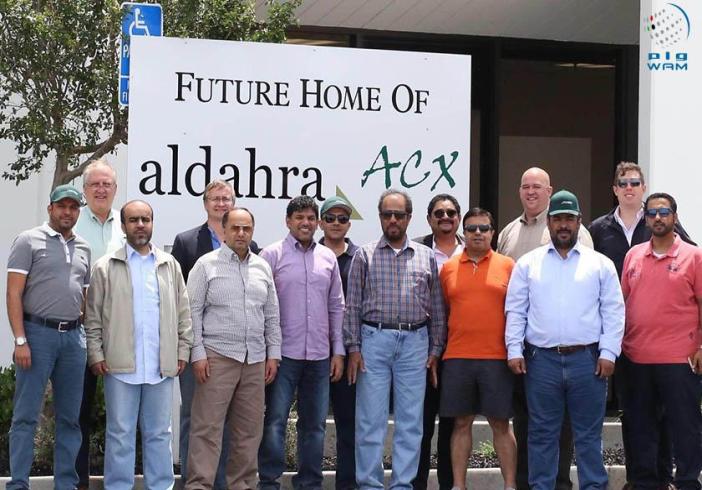 In the light of the strategic partnership between Al Dahra and Abu Dhabi Food Control Authority in the UAE food security program, a delegation from ADFCA visited a number of farms and factories of Al Dahra Animal Feed production projects in some Arab and foreign countries.

Al Dahra is a prominent leader in the agribusiness; specializing in the cultivation, production and trading of animal feed and essential human food commodities such as rice, flour, fruits and vegetables.

The visit covered the Kingdome of Morocco, Kingdom of Spain, U.S.A., and Egypt during the period from April 28th, to June 6th, 2016.

In the Moroccan City of Meknes, the delegation attended the International Farming Conference in its 11th year, which was held between the 26th of April and the 1st of May, where Al Dahra Morocco participated, and its stand attracted the attention of top ranking officials and the Exhibition visitors.

Moreover, Cadillac project is one of the major farming projects in the area, located 15 minutes away from Meknes City. At the peak times it employs more than 145 workers of both genders and 50 workers at the regular times. It is equipped with the latest and state-of-the-art irrigation and production technology. Additionally, Al Kieyah farm covers 268 Hectares divided into 162 Hectare where different types of olive trees are grown, 53 Hectares of pomegranate trees and 18 Hectares of different fruit trees fed by 152,000 m3 capacity water tank, linked to a modern automatically operated system that is remotely controlled.

Furthermore, in Spain the delegation visited Al Dahra Fagavi’s head office and toured the farms and factories in Lleida and Bujaraloz during the period from May 2nd to May 4th.

Al Dahra Fagavi is specialized in the production, international marketing and distribution of multiple forage varieties in the form of bales and pellets. Its annual production capacity currently exceeds 550,000 metric tons. Additionally, across various parts of Spain, about 21,000 acres of land are currently cultivated.

On the other hand, Al Dahra Fagavi owns and operates five production factories located in Ivars, Linyola, Bellvís, Torregrossa and Bujaraloz, and one distribution center located in Vila-sana. The Head Office is located in Fondarella, in the province of Catalonia. All production facilities operate to very high quality standards and are ISO 9001 certified.

The key attributes that differentiate Al Dahra Fagavi in the forage industry are the company’s commitment to selecting and processing the best raw materials resulting in optimum quality of its end-products, employing cutting-edge forage dehydration and packing technologies and building logistics capabilities to ensure increased management control over the entire supply chain. Al Dahra Fagavi has built long-term relations with the port of Barcelona, international shippers and inland transport operators, ensuring a seamless and competitive distribution of its products.

The Delegation’s third stop was between May 15th and the 22nd, as they visited the animal feed plants, warehouses and operations management center of Al Dahra ACX Global in Imperial Valley in the U.S.A. In addition, they had a field trip to ADACX lands which are distributed in about 11,000 acers located in the east and west coasts.

To complement its strong presence in strategically-located forage growing areas, Al Dahra ACX Global has started its own cultivation on owned and controlled land in Southern California and Eastern Arizona through Al Dahra Farms USA it continues to invest in growing its farming lands portfolio. Its annual cultivation capacity is upwards of 130,000 metric tons of alfalfa and other grass hay. In the near future, the company plans to add a new 7,500 acres of land to its land bank in various parts of the United States for the cultivation of alfalfa and other crops.

Abu Dhabi Food Control Authority delegation concluded their tour by visiting the largest projects of Al Dahra agriculture in Toshka, Egypt, as well as visiting the farms of East Owinat from the period of June 2nd till the 4th, 2016.

Al Dahra Egypt was founded in 2007 as a result of the collaborative effort between the governments of the United Arab Emirates and Egypt with the purpose of establishing agricultural projects for cultivation, production and export of food products and animal feed.

Al Dahra Egypt manages four large distinctive agricultural projects. In East Owaynat particularly, the company cultivates about 16,185 acres of land for the production of alfalfa, silage and other crops, producing about 50,000 tons of forage and silage per annum. In addition, Al Dahra Egypt owns and operates a forage processing and baling facility.

Al Dahra Egypt is specialized in land renovation and infrastructure set up, which is considered a core competency of the company. Throughout its different projects in Nubariya, Salhiya and East Owaynat, it has drilled wells, drip and pivot irrigation systems, pumping stations and filtration units. Al Dahra Egypt also owns cultivation projects in Toshkha with an impressive 100,000 acres of land, currently under development for the cultivation of alfalfa and various other crops.

By enjoying an annual production capacity of 2 million metric tons and more than 40 types of products, the main focus of the animal feed sector at Al Dahra Agriculture is to fulfill the needs of the dairy products and cattle breeding companies.

In addition, the sector closely collaborates with the local animal feed farmers, and cooperative societies as well as the Ministries of Agriculture and Animal Resources.

In conclusion, Al Dahra Holding products are grown, produced, purchased and supplied from different sources and regions which come in many forms (bulk or pellets) and at various degrees and packages to suit all markets and customer needs. All products which are not locally produced are outsourced from internationally recognized suppliers who are committed to the international processes and standards in the animal feed industry.