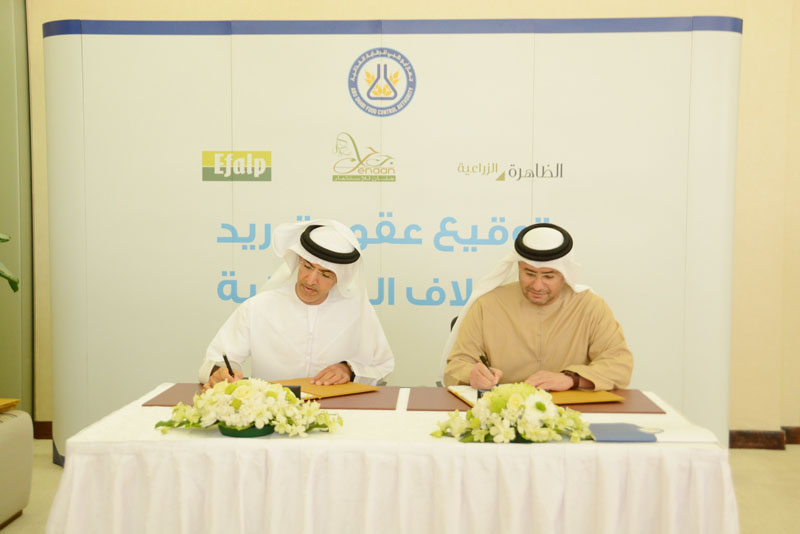 Al Dahra Agriculture, a subsidiary of Al Dahra Holding and a prominent multinational feed and food agribusiness player, headquartered in Abu Dhabi with presence across four continents and trading activity in more than 25 countries, announced today that it has signed the renewal of the animal feed supply agreement with Abu Dhabi Food Control Authority (“ADFCA”) for a new five years period. One of the primary mandates of ADFCA is to execute the Abu Dhabi government vision to preserve national water resources and ensure long-term food security. As such, ADFCA is responsible for managing the local farmers’ feed subsidy program, operating in over 16 distribution sites across the Emirate and the Western Region.

Since the outset, Al Dahra has adopted a strategic partnership approach to achieve sustainable food security. It has made agricultural investments in various parts of the globe, hence allowing for undisrupted supply all-year round and across all seasons. Geographic diversification has further helped to build a strong framework for mitigation against various risks including climate change, export bans and other trading related risks. For instance, a stock reserve, with constant rotation, has been created at various international sites in order to address emergencies and global supply shortages.

Moreover, the ongoing process of value creation for ADFCA has been reinforced by the implementation of two key strategic initiatives:

Firstly, Al Dahra has been successful at achieving secure vertical integration, gaining greater control over the end-to-end supply chain from farming to harvesting, processing, baling, storing, shipping and trading. Supply chain management has always been viewed as an integral part of the company’s operating model. Over the past few years, Al Dahra has built strong logistics capabilities and has forged excellent relations with key international shipping lines and ports at key origins. In order to strengthen its local logistics operations, it has also acquired majority shares in Agility Abu Dhabi, a leading logistics player in the UAE market.

Secondly, Al Dahra has gained first hand expertise in the field of animal feed farming and processing by acquiring majority shares in leading industry experts. These acquisitions along with agricultural, research and development and technological investments have contributed to the continuous improvement in product quality across the various stages of cultivation and production, ensuring optimum feed product characteristics delivery to ADFCA.

On the occasion of the signing of the agreement, HE Khadim Al Darei, Vice Chairman and Managing Director of Al Dahra Holding commented: "the renewal of the feed supply agreement for a new period not only commemorates the strong partnership ties that we have built with ADFCA over the years, but also reconfirms Al Dahra's distinctive and competitive advantage in executing the long-term food security program despite the complexity and magnitude of such a project. We bring in a comprehensive solution characterized by supply continuity, high product quality, efficient category management and operational excellence". In turn, HE Dr. Mugheer Khamis Al Khelee, Managing Director of ADFCA, added: "we have placed our confidence in Al Dahra since the early days and the group has since achieved multiple crucial milestones in facilitating the execution of our government's food security vision. We are pleased to be renewing our vote of confidence in the group's capabilities and we look forward for further joint achievements in the coming five years"

The execution of the new feed supply agreement is expected to start at the end of January 2015 and last for a period of five years. Al Dahra will be in charge of farming, processing and sourcing different feed varieties such as alfalfa and rice straw and alfalfa mix from a multitude of sources and ensure delivery to Abu Dhabi according to a predefined delivery schedule.