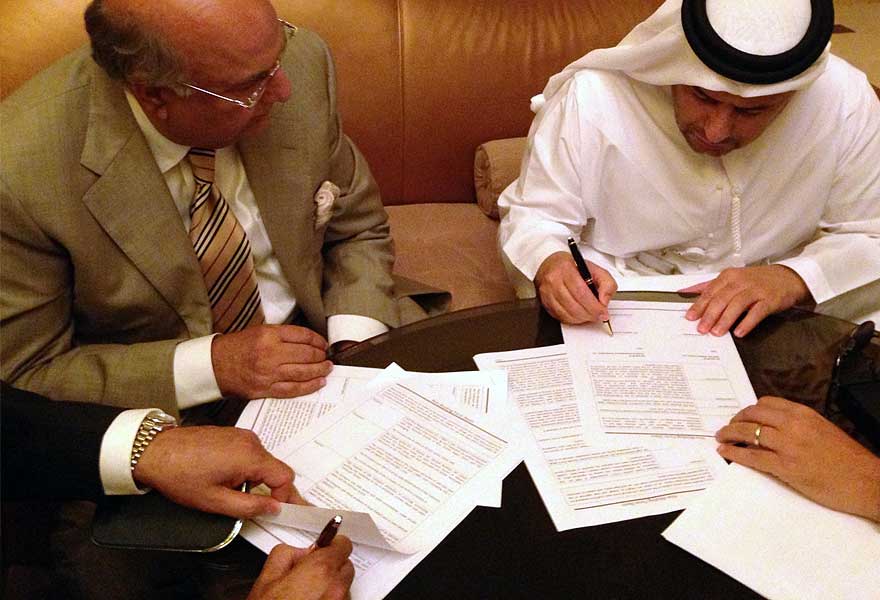 Al Dahra Holding of Abu Dhabi and Kohinoor Foods of India have today announced the closing of a series of joint ventures and acquisition deals that will seek to establish a robust framework for achieving improved agricultural trade between India and the UAE, as part of the wider UAE plan to provide long-term and sustainable food security for the country.

Al Dahra International Investments LLC, the investment arm of Al Dahra Holding, is responsible for spearheading the deals that will secure the supply of the highest quality rice into the UAE market, at affordable prices.

Al Dahra Agriculture, a subsidiary of Al Dahra Holding, has been given a mandate from the Abu Dhabi Government to source, process, farm and market animal feed. In addition, the company is also involved in the sourcing, processing and farming of fruits, vegetables, and other food commodities for human consumption and has a strong presence in the MEA region.

Kohinoor Foods Ltd., the owner of one of the largest rice mills in India, is predominantly engaged in the processing of rice for the domestic and export markets. In addition, the company exports ready-to-eat products, cooking sauces and pastes, spices, seasonings, and frozen foods.

First is Al Dahra's acquisition of a 20 per cent stake in Kohinoor Foods Ltd, through fully paid up equity shares on preferential basis.

Secondly, there will be the formation of a new joint-venture (JV) between the two partners called "Al Dahra Kohinoor LLC" where the ownership structure will be 75% to Al Dahra, 20% owned by Kohinoor and 5% owned by other partners. The JV will also see the construction of an integrated rice milling, storage and distribution plant, to be situated in the Khalifa Industrial Zone Abu Dhabi (Kizad). This rice factory will be the largest and only factory of its kind in the Gulf Region.

It is anticipated that the Abu Dhabi rice mill will be operational towards the end of 2014 and will produce about 75,000 metric tons (MT) of rice annually, whilst the JV, as a whole, will have an approximate trading capacity of 150,000MT per annum.

"Today is a historic day for Al Dahra and the UAE. The financial arrangements made in the deals we have announced demonstrate a commitment, by both parties, to build upon the raw materials trade from India and to enhance rice milling expertise and capabilities in Abu Dhabi. Long term, this will secure a steady supply of rice into the UAE and in the short to medium term, the new plant, in Kizad, will help secure strategic stock reserve up to an initial storage capacity of 30,000 metric tons, reaching 50,000 metric tons in subsequent phases."

"This is an excellent win-win deal for both partners. As a result, Kohinoor Foods Ltd. has become the exclusive supplier of rice to Al Dahra. As a partner in the joint venture in Abu Dhabi, we are also committed to exchanging and sharing knowledge, rice milling expertise and product innovation techniques. In addition, Kohinoor will also gain enhanced marketing and trading access for our rice and other products, across the Arabian Gulf and Middle East region."

As part of the Abu Dhabi Economic Vision 2030, a key long-term strategic initiative is to ensure sustainable and undisrupted supply of essential food commodities into the Emirates. Executing its mandate to contribute towards Food Security realization, Al Dahra Holding has recognized rice as a key commodity consumed in the local and regional markets, with future demand expected to further increase. To this end, the company has channeled its investments into India and Pakistan – the two largest producers of the highest quality Basmati rice.

Prior to its partnership with Kohinoor Foods in India, Al Dahra Holding has also acquired Brukfiled Rice in Pakistan in 2011. With today’s deals announced, the combined future annual production capacity of Al Dahra Holding through its India, Pakistan and Abu Dhabi facilities will exceed 200,000MT. Such investments will not only allow the company to deliver on the supply contract it has signed with the UAE Food Security Center, but it will also position it to act as a key regional supplier to the different countries in the Gulf, Africa and Europe.